This year, Iris reticulata ‘Harmony’ was in bloom on January 18 and lasted until we hit warm weather in early February. More and more iris opened in different locations, first on a warm west facing bank, then in sunny areas in the woods, and last on west facing slopes that had considerable shade.

For the first time in many years Snowdrops (Galanthus elwesii) opened in December, January and February. Some of these are finally starting to clump up. This year I added 200 more in a new section in the woodland garden. I really don’t know what made me do it but I soaked the bulbs overnight with good results. In past years, I would plant 100 and maybe 20 came up. 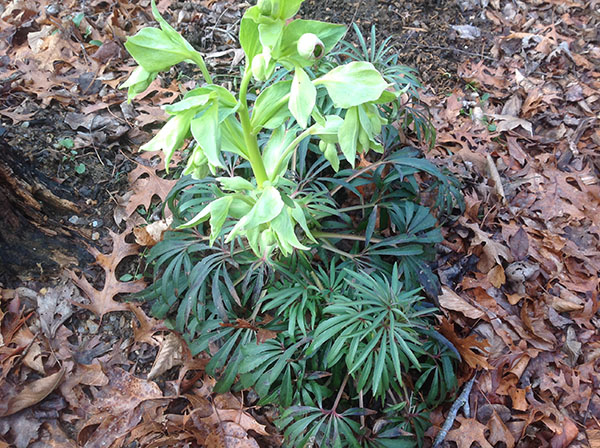 Helleborus foetidus (Stinking Hellebore-but why? it doesn’t stink!) has been in bloom all of January and February and even now in early March is still going strong. This is a fabulous plant to add color to the winter scene, especially when seen against dark conifers and hollies. It is short lived but seeds liberally in places it likes or where ants drop the seeds.

My personal favorite of all the Christmas roses is Helleborus niger. It’s a reminder of thousands that grew on a large bank along the Traun River in Austria where I grew up. There they literally came out of the snow in December and we would pick a bunch and lay them in a soup plate with a rock in the center over the stems and by morning the stems would rise up vertically so the whole plate became a plate of Christmas roses. 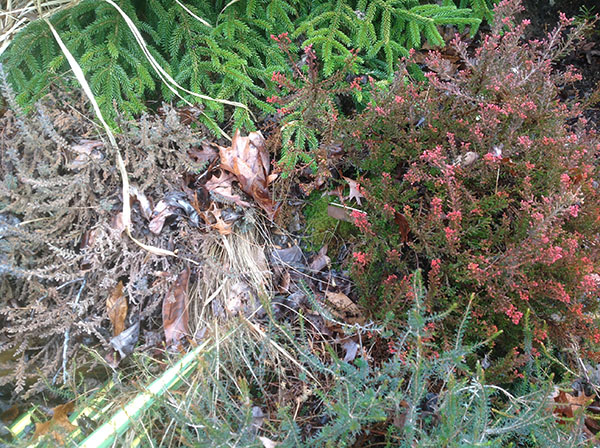 I have just a few heather and heath plants because I don’t have enough sun for them to grow happily. They were planted 14 years ago, labels have disappeared. One of my favorite for year-round color is Erica carnea ‘Springwood White’. 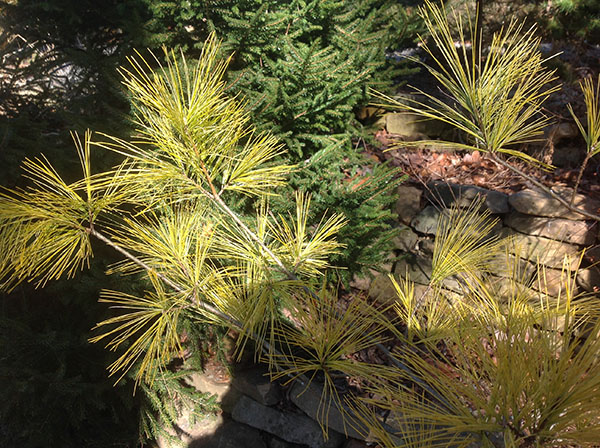 Adding brilliant gold to the winter landscape are several of my dwarf conifers. I grow a number of Chamaecyparis and Thuja, as well as Picea (a. Skyland) that maintain their gold color throughout the year. Actually, they are not really gold for me since I have so much shade but I prefer the softer gold – more chartreuse – in a woodland setting. A favorite is Pinus strobus ‘Winter Gold’ shown above.
I have so many conifers, rhododendrons, evergreen azaleas and hollies that the woodland garden never really looks gray and drab throughout the winter months. Add to all that green and chartreuse the luster and shine on Magnolia grandiflora leaves, several of the hollies, and, colorful branches of shrub dogwoods like ‘Midwinter Fire’, there is truly a lot of color all throughout November, December, January. Then come all the little bulbs in quick succession.

A Kent garden through the seasons